People come to the high desert for many reasons, not the least of which is the stark beauty of the desert itself. High desert climate and topography have created challenging ecosystems which need protecting and which are home to different types of wildlife. Human residents of the high desert should take the time to learn about the non-human residents who share this environment in order to co-exist safely and harmoniously.

Many of these animals live throughout the continental United States and need no special description. Opossums or “possums,” raccoons, skunks, rabbits and jackrabbits are familiar to most people. Quail and roadrunners pose no threat to humans or their property. Other high desert wildlife can be a threat to domestic animals and small pets, and Animal Control wants all Apple Valley residents to be informed and alert.

The underlying theme in all your interaction with wild animals should be: DO NOTHING TO CHANGE ANIMAL INSTINCTS OR HABITS. Informed animal lovers know better than to feed wild animals. Feeding wild animals trains them out of the instinctive – and protective – urge to stay away from humans. Once an animal becomes used to being fed, it loses its incentive to hunt and may also become aggressive with humans that do not offer it food. Coyotes and raccoons are prime examples of animals that will ransack properties looking for food.

On a less aggressive but equally destructive note, feeding apparently harmless animals such as ground squirrels and rabbits upsets the ecosystem. By providing more food than is naturally available, humans change the population size which overeats the available natural food supply. Predators are attracted by the increased numbers of prey, humans feel threatened by the predators, and the confrontation escalates.

None of this will happen if people remember to enjoy wildlife from a distance.

Although Africanized honeybees (AHB) are not native to the region, this more aggressive strain of bees has arrived in the high desert. There have been instances of domestic animals, confined and unable to escape the bees, that died from bee stings.

Africanized honeybees are more easily disturbed and are more aggressive than the normal honeybee. While the AHB sting is no worse than a sting from a regular honeybee, more individuals from a disturbed colony are apt to sting the same victim. Like any other bee, the AHB stings only once and then dies. 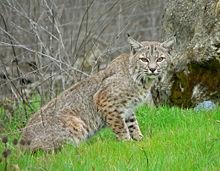 Bobcats normally stay away from developed areas, but they do live in the high desert. Somewhat larger than housecats, they can grow to weigh 30 pounds. There have been no recorded reports of damage done by bobcats in the area. Like any other wild animal, however, they can be aggressive if they feel threatened or trapped.  Bear in mind that bobcats are hunters and will take pet birds -- even from cages on back porches -- as well as small dogs and cats.

This relatively large lizard in the iguana family is seldom seen, although formerly there were large populations in the high desert. If you see one, you are lucky! 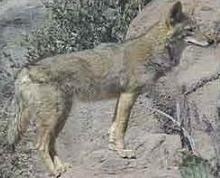 sert. They are carnivores, subsisting primarily on rodents and reptiles. As homes are built in coyote hunting grounds, coyotes are willing to eat domestic cats and small dogs, when possible. Leaving pet food outside is a good way to attract coyotes who will rummage through trash for edible tidbits.  They will also eat smaller dogs and cats left outside.

During the months of June and November coyotes can be the most aggressive. For coyotes to watch people and not run away indicates they may be sick, or they have lost their fear of people which may lead to dangerous behavior. 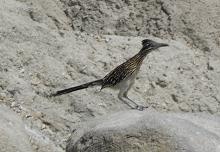 These unusual birds are becoming scarcer as the high desert develops, but still may be seen running along the desert or crossing roads. Roadrunners are members of the cuckoo family. They can fly, although not for long distances, but prefer to run after prey. Roadrunners eat insects, eggs, small birds, and small reptiles – including rattlesnakes.

Roadrunners are remarkably quick which allows them to catch hummingbirds in the air and rattlesnakes between strikes. The roadrunner grabs the snake towards the tail and repeatedly strikes it against the ground until it is dead.

High desert snakes include the king snake, gopher snake, and rattlesnakes, among others. Any snake can bite if disturbed or frightened, but among these only the rattlesnakes are venomous. The rattlesnake species nicknamed the “Mojave Green” is the most poisonous of rattlesnakes because its venom attacks the nervous system. All snakebite victims should receive professional medical treatment as soon as possible. Do not try to apply a tourniquet or cut the bite to suction out poison.

Desert tortoises have a diminishing habitat. Increased development, paving of additional roads, and new home construction are all limiting the areas in which tortoises may live safely. In addition to the permanent shrinking of habitat, off-road recreation presents a growing threat to tortoises. Dune buggies, all-terrain vehicles and motorcycles operating in the desert can crush tortoise burrows, destroying eggs. They can also strike tortoises, breaking the shell before the tortoise can move away. This is a serious threat to the already endangered tortoise population.

State law requires any person bitten by an animal to report the bite to the appropriate Animal Control Division. An officer will fill out a bite report and, if possible, quarantine the animal for ten (10) days. In most cases of domestic animal bites, the quarantine can be done at home. Problem animals may require quarantine at the Animal Shelter, as determined by the Animal Control Officer.

Dog, Cat and Skunk Traps are available free of charge to residents who experience problem animals at their residence. Traps can be signed out to residents Monday through Thursday at the Animal Shelter. When the problem animals are captured in the trap, officers will remove the trapped animal from the property either the day of capture or the next business day. Traps are signed out for seven days and must be returned to the Shelter when due.