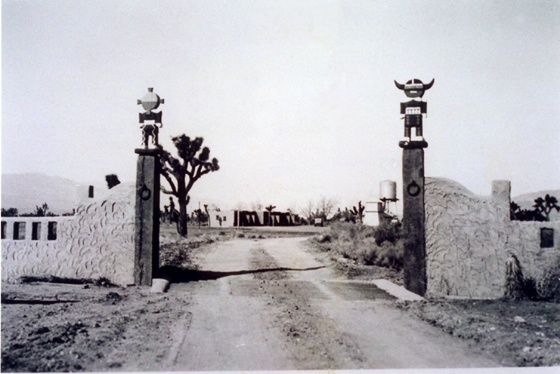 Gates leading to the Yucca Loma Ranch, circa 1930s. The remaining home of this ranch still stands at Rincon and Eyota Roads, north of Sitting Bull.

A Brief History of Apple Valley

While we became an official Town when residents voted for incorporation in 1988, our history goes back much further. Local historians have found signs of Serrano Indian camps along the Mojave River in Apple Valley. They were already here when Father Francisco Garces arrived in 1776, as he established the Spanish missions throughout California. In the late 1800s, the Paiute Indians also migrated to this area. The Mojave River Trail hosted trappers, gold prospectors, pack mules and Mormon wagon trains—over 13,000 people passed through here between 1849 and 1859. It was in 1860 that the first cabin was built in Apple Valley by Silas Cox, and the first road was cut the following year.

There aren't any apples in Apple Valley!
There are many stories as to how Apple Valley acquired its name. According to the late Mary Hampton, local historian, the name arose from the abundance of apple orchards that existed here in the 1920s. Some say the name “Apple Valley” originated from The Appleton Land Company that was based in this area in the early 1900s. Ursula Poates, one of the first settlers in the area, is credited with saying, “There were some apples being raised along the river in those early days, but not by the ton, so I just cut it down and called it Apple Valley!” By 1920, apples were being grown by the ton at award-winning orchards. Unfortunately, with the Great Depression and the cost of pumping water for irrigation, the orchards died off in the 1930s.

With a pleasant climate and lots of land, many types of ranches were built in the area. They touted the dry desert air as a cure for ailments of all sorts, including tuberculosis and asthma. Other ranches provided a haven for shell-shock victims of World War I, while still others developed into guest ranches.  People would come to Apple Valley to enjoy the western lifestyle where they could ride horses, attend rodeos and just get away from the big city.

Want to learn more? A great deal of information is available on the History of Apple Valley:

Historical Points of Interest booklet, published by the Historical Advisory Committee.  Available free of charge at Town Hall.  This book will soon be available to view on the website.

The History of Apple Valley, by Kate O'Rourke
Available at the Chamber of Commerce and Town Hall, for $20.
A hard-bound book with many photos, Kate draws on many personal interviews and published accounts for this compilation of Apple Valley history since Early Man.

DVD:  The History of Apple Valley
Based on the book by Kate O'Rourke, this movie showcases four distinct eras of our history, and was produced by the Video Department students at the Academy For Academic Excellence.  You may recognize neighbors and other local dignitaries playing people important in our Town's history.  The complete set is available for purchase at the Chamber of Commerce and Town Hall for $20.

Images of America: Apple Valley, by Michelle Lovato
Available at the Chamber of Commerce and Town Hall for $15.  Also sold at Barnes and Noble, Costco and other booksellers.  This photo history of our Town features over 200 photographs from collections of the Town, the Victor Valley College Local History Collection, Mohahve Historical Society and many individuals.  Each photograph is captioned.

Mohahve Historical Society  (The spelling is intentional! Visit their website to learn why.)

Free viewers are required for some of the attached documents.
They can be downloaded by clicking on the icons below.